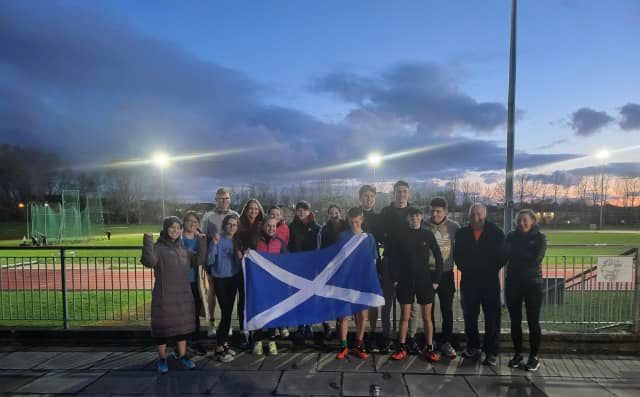 What a Winter for Law athletes - by Coach Eddie McQuillan

In a packed winter season, interrupted by illness and injury, one group of senior Law athletes started on 9 Oct at the West District XC Relays in Glasgow.

The National Short Course XC came in early November on “home” soil at Lanark Racecourse and all five had solid results in atrocious conditions. A few weeks later, in much better conditions, three of the squad ran the Scottish University XC Championships in Edinburgh. Emily (4th), Jess (5th Under 20yrs) and Kieran (43rd) all raced extremely well. Jess and Kieran were in action again on 4 Dec at the West District XC in Balloch with another solid run from Kieran and Jess winning Under 20 Bronze. Despite missing this race through illness Emily (Scottish Universities) and Maddy (West District) were selected for the Inter-Districts at Irvine in January with gutsy runs by each and Maddy recovering enough to finish 2nd in the Feel the Burns Hill Race in Selkirk next day!

In March Emily and Jess were selected to represent West District at the British Inter-Counties Championships at Loughborough where both finished strongly against the best in Britain. Not to be outdone Maddy placed 4th at the Birnam Hill Race in Dunkeld. Finishing as they started, Emily, Jess and Maddy (with club mate Reagan Binnie) ran the Allan Scally Relays in Glasgow where all ran PBs in their 5k relay legs.

All are looking forward to the summer and competing on the tracks, roads and hills around Scotland.

It was the first time competing in National Championship for 3 of our u13 athletes.

Luke Evans picked up a silver medal in the 200m and also made the final of the 60m.

Jack Duffin and Sophie Todd also made the final of the 200m and all 3 ran excellent personal best performances.

At the National relays the u13 girls got bronze

In the SAIL relays the u13 boys took the gold and the U13 girls the silver which was great end to their first competitive season and looking forward to what they will achieve outdoors.

We also had lots of athletes competing for first time in open graded events and looking forward to seeing them progress in the coming year.

This season has been successful for our younger athletes. They have been working exceptionally hard on improving their running, throwing and jumping technique and it has been paying off! The athletes have learned the importance of each element of athletics and how they work in coalition with each other.

Our first major competition took place in the Emirates arena and seen 16 of our youngsters take on the SUPERteams championship. This was the first time many of our young athletes had taken on a competition. All 4 teams competed in shot putt, long jump, 60m sprint and 4x200m relay. A tough day of competition finished with 2 of our teams placing in the top 10 in Scotland.

We later seen Cameron Chambers, Gabriel Calderwood and Heath Key take part in the National relay championships and youth development league relays. The boys gave their all and won National level medals for their age group.

The middle distance athletes with Law & District had a good winter with a contrasting mixture of successes indoors, on the road and over cross country. The group has a span of age groups from Masters over 40 to under 15s and a range of abilities, with some dads taking up running alongside the youngsters who include Scottish track Champion athletes and Scottish Athletic team members. The younger athletes have enormously good and generous example and advice from their fellow athletes, particularly the older athletes.

The early part of the winter season included the West District Cross country where Jessica Inglis, an u15 girl began her climb towards a great winter season, finishing 4th in the race which resulted in Jessica being selected for the Inter-District team at Irvine, which in turn earned Jessica a place in the West of Scotland team in the prestigious Loughburough Cross Country event where again Jessica was in the forefront of the team over a notoriously tough course. Jessica, an under 15, was duly selected for the Scottish cross-country team who travelled to Belfast, and, racing against athletes several years older than her, helped the Scottish Team to the bronze medal position. The Scottish Schools Cross Country Championship saw Jessica claim 4th position and a place in the Scottish team competing in Wales where she helped the keep the Scottish flag flying with a great run. Jessica was rewarded for her efforts when she won Lanarkshire Cross Country championship. In addition to her Cross country efforts, Jessica finished 4th in the Scottish Road Race Championship and was 3rd in 6K race in the Tom Scott Road Race, a high standard event at Strathclyde Park.

Ryan Kellock an u17 boy also had a good winter. His high position finish in the West District Cross Country Championship secured him a place the West District team at Irvine and his excellent run there led to Ryan being our second member of the West team running at Loughburough. Finishing 3rd in the Lanarkshire Cross Country completed Ryan’s Cross Country season and he can look forward to more improvement in the future.

The Lanarkshire Cross Country was one of the races still to survive in a depleted winter calendar and the athletes ran well with u17 women Fiona Currie finishing 2nd and leading her team mates, Amanda Quinn and Ayumi Faulds to 2nd Team place. Fiona Currie, set a PB of 2.24 for 800m indoors and took 2nd Place in in the B final of the Scottish Schools indoor championship. Another improving athlete.

A fellow u17, Logan Whitton picked up a few prizes in the winter, putting in a lot of work in addition to the organised sessions is paying off. At u17 level, Logan was 3rd in the Lanarkshire Cross Country Championship, 2nd at Livingston cross country and First u17 in the hotly contested Tom Scott 6k.

Along with other senior athletes, Ross Hill, Reagan Binnie and Darran Muir, members of the group since primary school are very influenciel in the group are real leaders who still compete at a high level. They still find time to show an example and help with pacemaking for the younger athletes who need a little guidance. Darran managed to squeeze in some competitions and was 3rd over 40 in the 10mile Tom Scott which is also the Scottish 10mile Championship race. He also finished 3rd over 800m in both the indoor and outdoor Scottish Championship and claimed silver in the Scottish Outdoor Championship 800m. He also took 2nd 0ver 40 place in the Lanarkshire Cross country championships.

The younger members, while developing are competing at a high level and u15 s Daniel Simpson and Alayna McCann while setting new PBs in the winter, were still working their way to the front of the fields in Cross country and road races. Alayna was 2nd under 15 girl and Daniel 3rd u15 boy in the 6k race of the Tom Scott event. Olivia Inglis was our youngest member of the group and her 6th place at the Lanarkshire Cross Country was rewarded by a bronze team medal along with Hannah Jamieson and Sophie Nelson who completed the team.

Oscar Logan was competing at u20 level and for an athlete who likes 800/400m races, Oscar can still manage to finish close to the leaders over tough cross country courses and in road races. Oscar’s fine run in the West District Championship earned him a place in the West District team competing at Irvine. Oscar prefers the track and was 2nd in the Scottish Indoor Championship at 800m and was gold medal winner of the Scottish Schools indoor at 800m. Both were excellent performances and just reward for the work put in during the year.